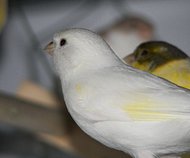 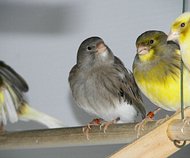 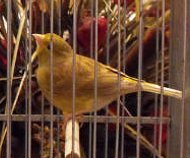 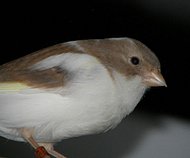 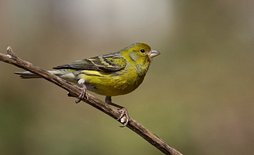 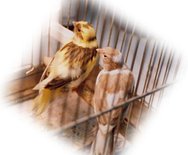 Melanin can be totally absent from the bird, which is what you see when you look at a canary that is completely yellow, or completely white.  This is called a "clear" bird.  All you are seeing is the pure ground color of the bird.  When melanin only affects a few feathers in a patch no bigger than a dime, the bird is called "ticked".

To the other extreme, a bird totally covered with the melanin overlay is called "self".  When one of these dark birds has only a few feathers showing of the ground color, it is referred to as a "foul" bird.

Everything in between the ticked canary and the foul canary is called variegated.  This is where the pattern or patches of melanin appear anywhere on the bird.  Each variegated bird is different, and the coloration can be quite beautiful.

Here we see the babies in the weaning cage and not looking so much like babies anymore.  It is amazing to see them develop and change from helpless chicks to independent beings in only a few short weeks.

I like variegated birds, as they can be identified by their unique markings.  I've even named some based on their markings.... A bird named "Lefty" because of a yellow left wing, a bird called "Santa" because of a white beard.  This year, I named one "Angry Bird" because of dark eyebrows that made him look mad all the time.

Is there a RED American SInger?  The official rules published by the American Singer Club allow for the creation of one, importing in the red gene as you follow the several-year breeding plan to create an American Singer from its source breeds of the Border Fancy and the German Roller.

The problem with attempting this is, with the import of the red gene, you get other aspects of the red canary... the loud and chopping song being the main concern.  You would have to start the breeding plan with a quality red Border Fancy canary or a quality red German Roller canary (the official breeding plan does not include a red colorbred canary).  Neither a red Border nor a red Roller are seen in official bird exhibitions, where birds are judged on the standards of their breed.  It would take YEARS of selective breeding to create either a red Border Fancy (with the body shape and size of the Border) or a red German Roller (with the rolling song of the Roller) to begin the quest for cultivating the red American Singer.

We may see some variations of melanin in American Singers due to naturally occurring mutations in the sex-linked genes.  More about this subject can be found on the "Cinnamon" page under the Breeding Canaries tab.
Just remember.......Canaries are NOT just a yellow bird!

When the cinnamon factor occurs in a white ground canary it produces what is termed a "fawn" color, which is more of a beige appearance.  You will notice the tinge of yellow on the flight feathers which is charactoristic of the dominant white ground color.

You will also encounter canaries where the black pigment is absent from the melanin.  The brown melanin that is left changes the appearance of a yellow ground colored canary to a warm cinnamon color.  This coloration is know as the "cinnamon factor".   Visit my "Cinnamon" page under the Breeding Canaries tab for more details on this gene.

When the melanin is the normal black/brown, the white ground colored bird is said to be a "blue" canary.  This "blue" is not like you would see on a parakeet, but is actually appears to be more of a slate gray.  This photo shows a blue hen.

American Singer canaries are also found with white ground color, another mutuation.   This photo is of a dominant white canary hen.  The mutated gene is dominating and pushing out the yellow ground color pigment so that it only appears on the edges of some feathers, particularly in the flight feathers.  White is the absence of pigment.  Consider that you don't put pigment into paint to make it white.  The bird appears to be white because the feathers have no pigment in them.

If you think that all canaries are yellow, you join the company of hundreds of folks who have this common misconception.  The yellow canary is a mutation that occurred as people began breeding canaries in captivity a few hundred years ago.  The wild canary is not a yellow bird.  It is a yellow-green bird with brown-black streaking on the back.  This is actually a bird of yellow ground color with a overlay of black/brown melanin pigment that gives it the appearange of green.

Now, the mutation of the canary being hatched without the melanin overlay, exposing the bright yellow ground color, probably occurred in the wild, but a yellow bird would be an easy target for predators.  It was protected in captivity, and soon became very popular.  Canaries were then bred selectively to produce more birds of this pure yellow color.  This color became so common that the words "canary yellow" are now as recognizable as a description for a certain color as the words "lime green" or "sky blue" are for other colors.

In the illustration below, you can see how a black/brown overlay on a yellow ground color produces an olive green color.  Artists frequently combine yellow paint and black paint to get various shades of green.  I guess it shouldn't surprise us that God chose the same colors in combination to get the green of the wild canary.