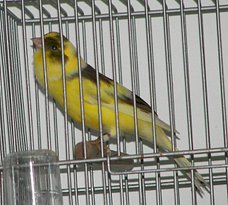 The male canary is the singer.   Hens chirp a few notes or calls, but nothing compared to the male's song.  There are a few rare hens who do sing, in fact, one of my first hens was initially thought to be a male by her breeder when he was separating his young males from his young females.  He thought this because she was singing softly, as all young males will do as they are first learning their songs.  Breeders usually pull the young males and cage them together with an adult male tutor, which really helps their song development.  After being in a flight with the young males for a few weeks, he noticed her being picked on by the other birds and that her song was not becoming stronger.  He pulled her from the flight, which rescued her from the feather pulling, and placed her with his young hens.

I purchased her because of her strong background (both her father and grandfather had won Best in Show awards for their song performance).  Since it is said that a hen carries the song of her father, I wanted her for my breeding program.  It was intriguing to watch and listen to her when she was in the flight cage with my other hens.  This unusual singing hen would sit on a perch and twitter her song, which contained quite a variety of phrases and notes.  She was a pleasure to have in the normally quiet cage.  She taught me to never say that hens cannot sing, as she proved to me that there are some who can sing, and do sing very well.

Enjoy listening to my collection of sound clips from the "founding fathers" of my breeding line.